The history of Domaine Chante l'Oiseau

The Commune of Campagnac-les-Quercy is located in the geographical area of what is now known as the IGP Vin de Domme (Indication Géographique Protégée wine from Domme), in the south of the Perigord Noir.  In the 1950s, the area was occupied by about 70 small farms, each of approximately 5-10 hectares (between 12 and 24 acres), who all produced a variety of crops.

Our farm, ‘Pouchou’ is located in Campagnac-les-Quercy and during this period, produced 15-20 hectolitres (1,500-2,000litres) of Malbec based table wine, some of which was sold in barrels.

In 1995, with the support of the local Councillor, Germinal Peiro, a few farmers from the neighbouring town of Florimont-Gaumier, replanted a vineyard of ‘noble’ vines (a term used to describe the international variety of grapes most recognisable for the top quality of wine they produce), capable of producing a quality wine. This movement was extremely beneficial for the region which has historically been difficult to farm in a traditional manner and has enabled the re-cultivation of an increasing number of hectares.  The majority of the original farms have since disappeared – in 2013 there were only four remaining in Campagnac.

In the 1970s, the lands of Pouchou had been converted into meadows. It wasn’t until 2009 when, following an analysis of the soil which showed that the Commune of Campagnac had a composition very similar to that of Grand Chablis, that a planting programme of Chardonnay vines was begun. This choice of vines allows us to offer a range of wines, not only through the ‘Caves de Dommes’ label (www.vindedomme.fr) with whom we have an excellent relationship, but also under the umbrella organisation of IGP Vin de Domme, having taken the decision to label ourselves in this way.

From the outset, we decided to follow the Organic route. The first parcel of land that we planted at Pouchou was called Chante l’Oiseau (the Songbird) and our vineyard has since become known as Domaine Chante l’Oiseau, the Home of the Songbird. 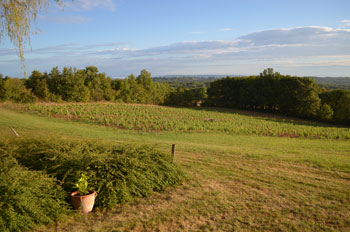 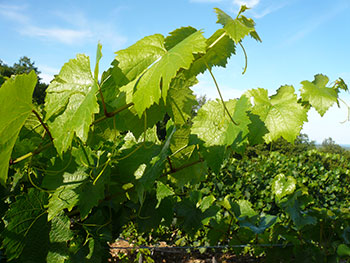